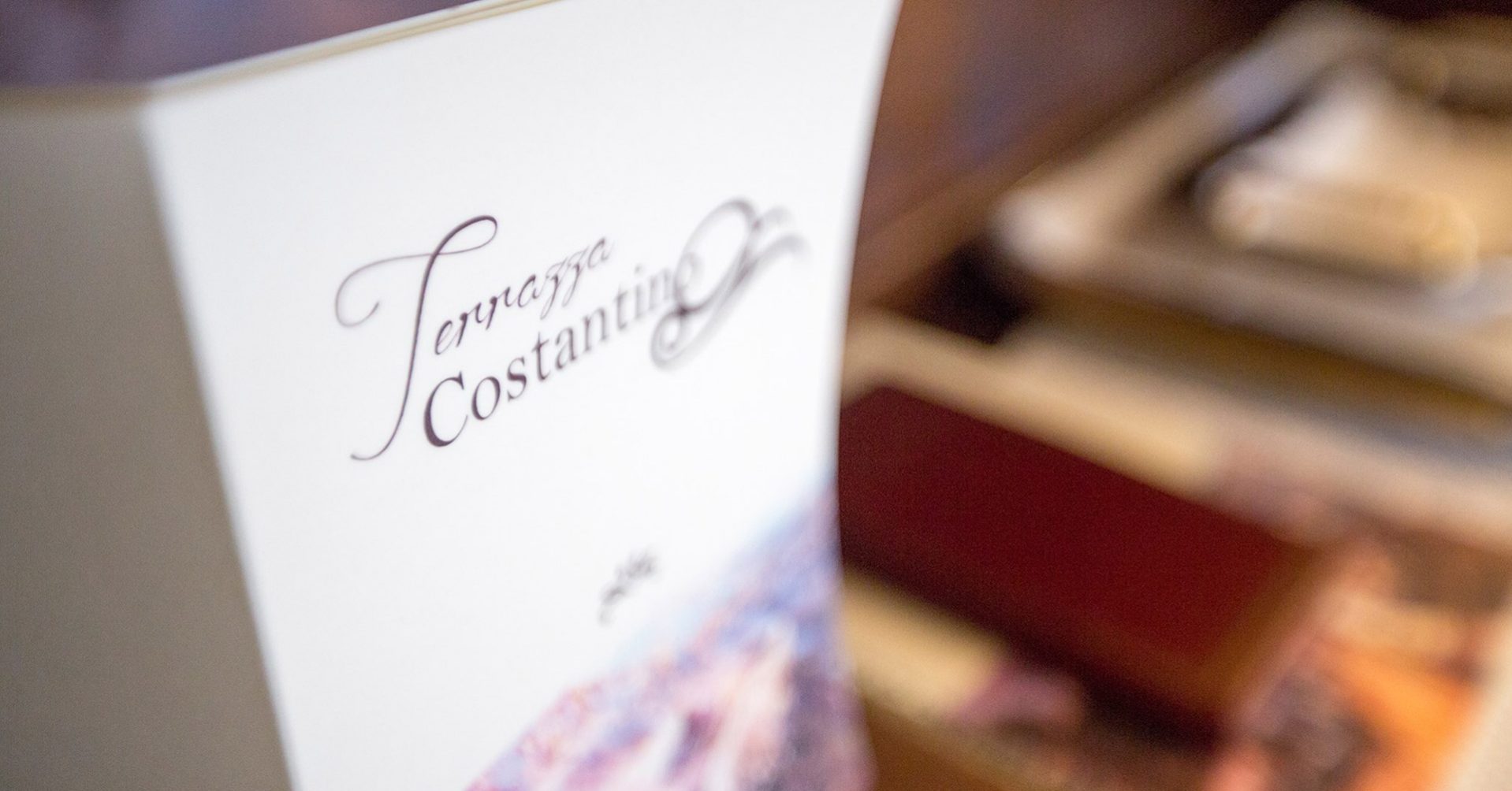 The first thing you see when you arrive is the welcoming nature of the venue. If I had a rude staff member in the room, that wouldn't be good. That is why we do a lot of training.

The mission of the Terrazza Costantino restaurant in Sclafani is to put the beauty and cuisine of inland Sicily on display. Giuseppe Costantino tells us how the restaurant was born and how it has changed its winning formula compared to his parent’s old trattoria

Let’s talk about Terrazza Costantino: how was the idea born and how has the restaurant evolved throughout the years. And also, why is the restaurant called “Terrazza” (terrace)?

“The restaurant is located where my parents’ trattoria used to be. It was a place that offered traditional cuisine for many years. After my experience and time spent in Northern Italy, in Piedmont and Liguria, I had somewhat abandoned my roots. We changed things up in 2016 when we opened Terrazza Costantino and that’s when it all started. There was already a strong bond between me and the land, although I was neither born nor raised there. I was born in Florence I moved from place to place a lot.
As for the name, we decided to call it “Terrazza” because of the magnificent view: many parts of Sicily have the sea, but we have the mountains. The restaurant overlooks the forest of Favara del Granza, with the large expanse of olive groves, also known as the Valley of Himera that goes all the way to Bonfornello.”

What is the restaurant’s mission?

“To let people know about inland Sicily, which is constantly underappreciated in comparison to the coastline, which has a natural advantage because of the sea. When we first opened, our cuisine was that of the local area, but the techniques and what we wanted to propose had to be refined. We embarked on this journey and we are currently at fifty per cent of what we would like to give to the customer. We are working a great deal with the locals, with farmers, with our suppliers. About 90% of the ingredients that we use can only be found in the Madonie, and 99% are Sicilian products – we try to use products like Parmesan as little as possible, as it is not Sicilian.”

How is Terrazza Costantino organised on the inside?

“We chose to have only 16 tables. In fact, the venue is a lot bigger and would allow a larger number of seats in the three rooms. But when you come to Sclafani, you expect to find a quiet place, not lots of noise and confusion. We also rent out a room just for private events that can accommodate up to 30 people.”
On TripAdvisor, you only have positive reviews. Many visitors write about the difficulty of reaching the town, but the comment that everyone makes is “it was worth it”. The atmosphere that you managed to create is truly rewarding…
“It is clear that the main problem is that of accessibility, but that is a problem that many inland places have. The roads are currently being repaired. We also offer a beautiful atmosphere with jazz music. The background creates a natural ambience in the restaurant”.

What promotions or packages does Terrazza Costantino offer?

“We offer several packages, including accommodation. One of these offers breakfast, a free minibar and includes a tasting menu for two people, as well as accommodation at a cost of €130 for two people sharing, excluding drinks. The suite is crucial for those who come from far and we opted for a low-cost option to make it accessible to everyone. It works very well because people are very likely to stop over, have dinner and leave the next day, after visiting this small Madonie village. It is a great place to unwind completely. There are customers who come from abroad, not only from Sicily, and to make a booking you only need to contact us on Facebook, via email or by phone.

What is your experience with tourists? What nationalities look for this kind of experience?

“Mainly continental Europeans- the Germans or the French for example- but above all, Italians. Palermo and Caltanissetta are the two closest cities, so our customers come mainly from there. Foreigners arrive in summer, especially from the start of April onwards”.
Treasuring the land, from the cuisine to its beautiful scenery, it is part of the motif of the restaurant; whose name already demonstrates the desire to present itself as a “terrace” overlooking Sclafani and the Sicilian inland. But also, the desire to present itself as a place of tranquillity and relaxation, for this reason, the work of those who welcome the customers is also fundamental. The first thing you see when you arrive is the welcoming nature of the venue. If I had a gruff staff member in the room, that wouldn’t be good, this is why we do a lot of training. We work hard on this to provide the customers with an enjoyable, comprehensive experience.

A passion discovered by chance, that became a job thanks to the trattoria of his parents and then a “role” in his own restaurant, Terrazza Costantino: Giuseppe Costantino does not…