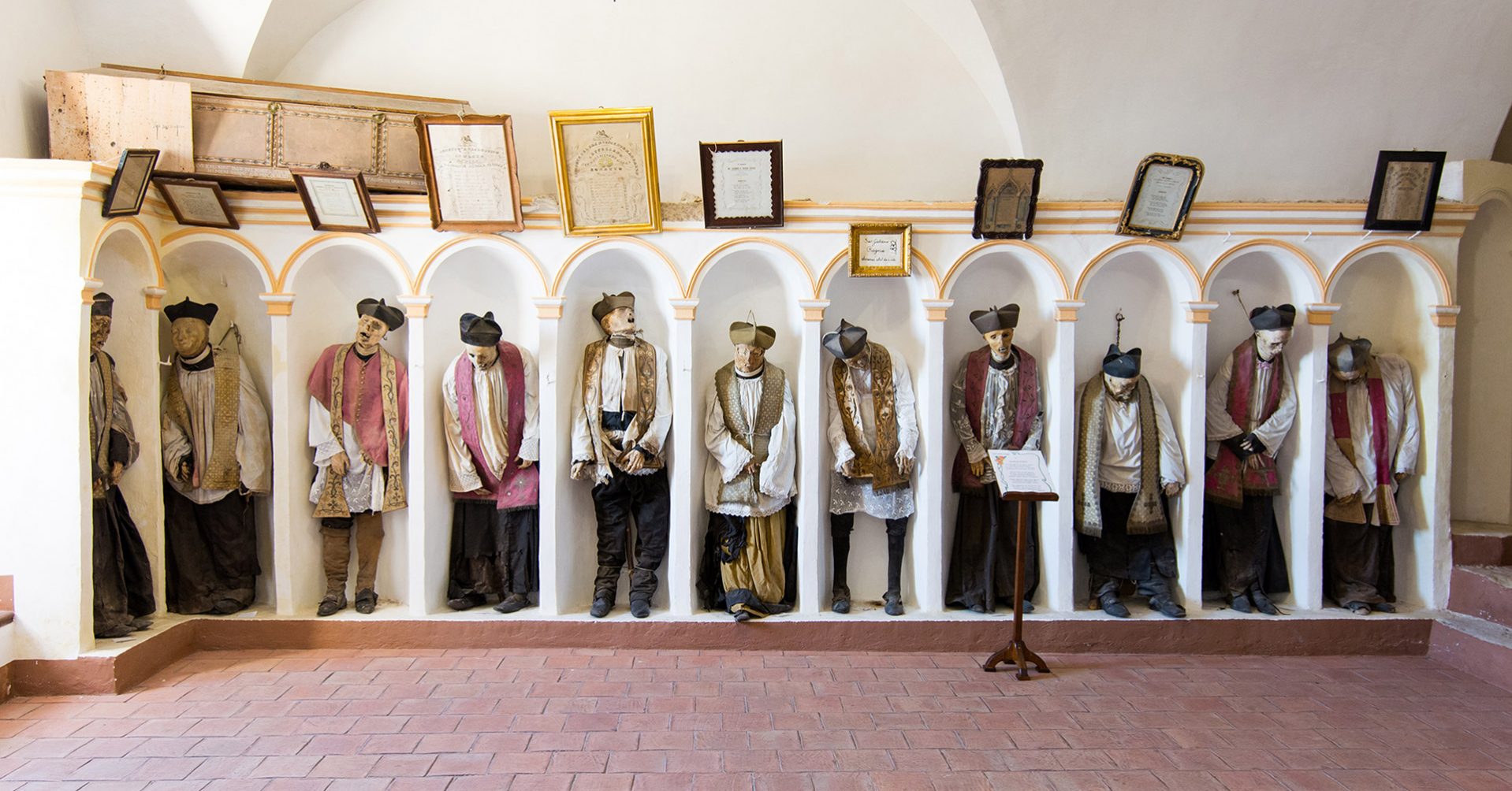 The Museum of Death, the Crypt of the mummies of Gangi

In this mysterious place, it is possible to admire one hundred perfectly preserved mummified bodies of clergymen.

The Crypt of the Priests “A Fossa di Parrini”, located in the basement of San Nicolò church in Gangi, represents a unique example of priceless ethnographic value, the protagonist of a cult dating back to the furthest regions of time, and in fact, when you descend into the crypt, it is as if the gates of Hades were suddenly wide open on the contemporary times.

In this mysterious place it is possible to admire one hundred perfectly preserved mummified bodies of clergymen, with their characteristic death masks (subject of several scientific studies), that place an emphasis on the bond that unites the living and the dead, through an attempt to reconstruct the faces of the deceased by using wax.

The burial reserved for church dignitaries of Gangi, who died between 1728 and 1872, makes it a unique site in the Sicilian mummiologic scene, also because of the excellent state of preservation of the mummies and of the places.

There is a sign welcoming the visitors, that says: “Come ye living to visit the death before the death visits you, for it is always better to forestall the fate”.

The crypt is composed of three rooms, in addition to the entrance: a large room where the chapel is situated with the niches that house the mummies of the priests; the next one is the ossuary, a semi-hidden place used for embalming, where the original table on which the bodies were placed for desiccation and natural drying of liquids.

The ancient practice of embalming was similar to that practised by the Egyptians; the deceased was treated with special ointments, bandaged and dressed in a cassock. The head was waxed for better preservation, detached from the body and then secured with a stick that started at the bottom. Above each niche, a plate was placed for easier recognition, bearing the name, the date of death, and a sonnet summarising the priest’s earthly life.

The biographical poems were written by the abbot and poet from Gangi, Giuseppe Fedele Vitale, the author of “Sicilia liberata”, the secretary of “Accademia degli Industriosi di Gangi”, who is also buried in the crypt.

Guided tours and visits to the Crypt and the Oratory of the Holy Sacrament may be held upon request, by contacting the staff of Chiesa Madre: