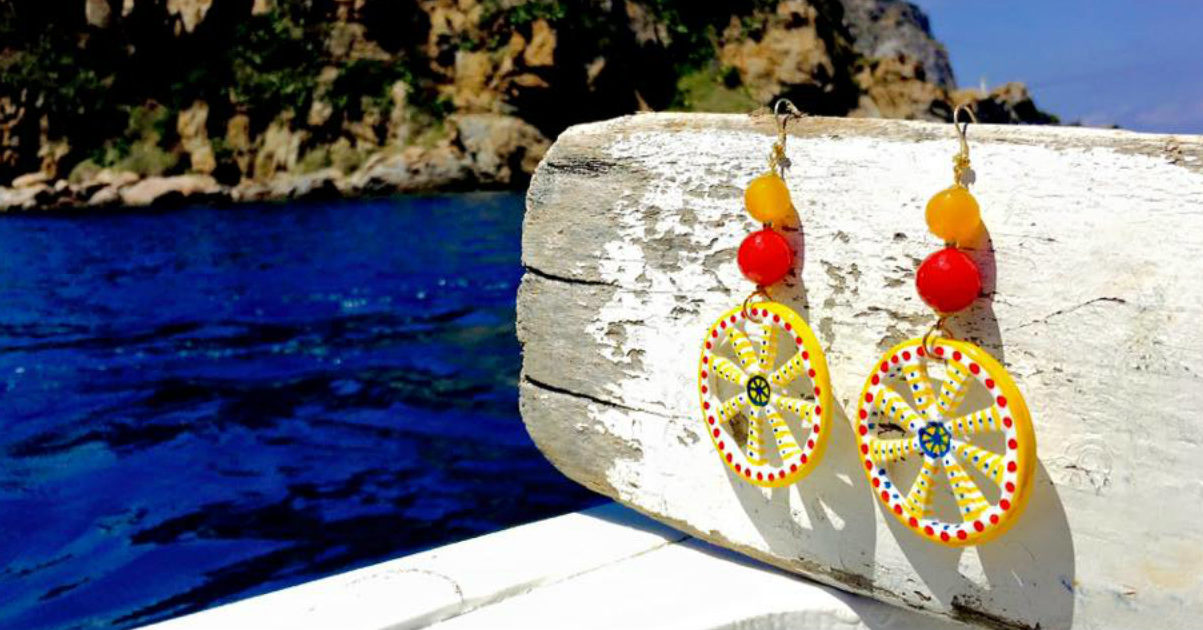 Tradition, inspiration and being Sicilian. Donna Pidda is characterised by these three attributes, an all-female brand that combines the icons and island’s colours into a line of jewels just waiting to be discovered.

Born from the imagination and creativity of the young Palermo-born Bruna Cirincione, a passionate graphic designer for craft and artisan, the themes of the Donna Pidda collection are made strictly by hand, and each item is original and precious in its uniqueness, with meticulous attention to detail from the designing stage model up to the choice of stones and other decorative materials and ornaments.

The Donna Pidda brand is inspired by the Queen of Denari from Sicilian playing cards, which in the imagination of the jewellery designer is a symbol of elegance, femininity, irony and seduction, skilfully mixed with the traditions of their land of origin. From here ceramics, cartwheels, the dark brown heads, cassatelle, the citrus fruits like the lemons and oranges, and the cacti spikes that distinguish the jewels of the collection, giving life to an unmistakably Sicilian style.

Born in a playful and in a completely casual way – as Bruna Cirincione tells us – Donna Pidda took its first steps thanks to the word of mouth of the three friends who the designer had given the first models she had made. From that to the notoriety that led to it appearing in the Dolce & Gabbana Missi Sicily lipstick advert filmed in Cefalù and its surroundings, which enhanced sensuality and the extreme femininity of the Sicilian woman, framed in the island’s enchanting beautiful landscape. The designer makes a cameo appearance in the advert, showing off a pair of her precious earrings, which embody the peculiarities of typical Sicilian feminine beauty. These earrings, in fact – depicting the typical Sicilian cartwheel with the characteristic bright colours of white, yellow, red and blue – and were particularly appreciated by the advert’s starring model, the twenty-year-old Brescia Ceretti, who was photographed with them giving a shout-out to Donna Pidda on her Instagram profile, in a “story” that has received millions of views.

In addition to the exaltation of Mediterranean woman’s characteristics through the exceptional opportunity of visibility provided by the Dolce & Gabbana advert, the Donna Pidda jewellery collection has found a way to enhance the uniqueness of the cultural and artistic productions of Sicily. Through the event “Indossa l’arte” [Wear Art], promoted in collaboration with the Mandralisca Museum of Cefalù, Bruna Cirincione has created a limited edition of jewellery consisting of five pairs of exclusive earrings inspired by the tiling displayed in the noble floor of Palazzo Mandralisca, once home to Enrico Pirajno baron of Mandralisca, a cultured and eclectic art collector who was born and lived in Cefalù in the first half of the nineteenth century.

The designer was particularly inspired by the multicoloured ceramics on display in the house museums halls and library. Each of the five pairs of earrings is a unique and an exclusive item, and the evocative tiling recall in an extremely original and refined way the colours and the shapes of the Sicilian decorative art of the eighteenth century.

News and events by the Editorial Staff of Cefalu.it.