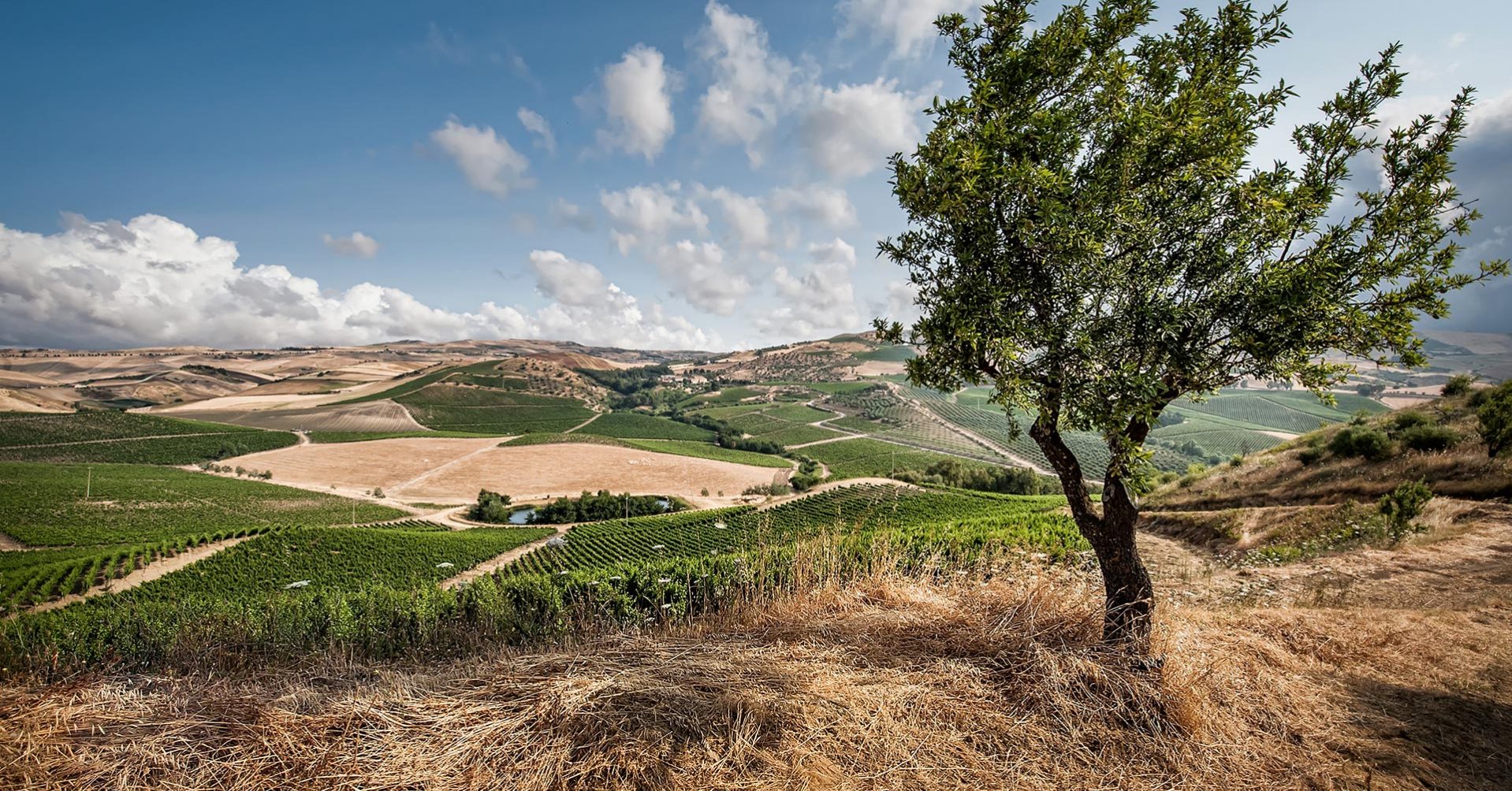 4 hills, 12 different types of soil and 55 indigenous and international vines – these are the treasures contained in the 500 hectares of the Regaleali Estate, the centre of the Tasca d’Almerita family business. Here, in the municipality of Sclafani Bagni, between the villages of Valledolmo (PA) and Vallelunga (CL), you will find this workshop for research on soils and on the adaptation of vines. The estate in its dominant position looks like an oasis, an immense lush garden of vines and olive trees, surrounded by a desert landscape of harvested wheat fields. Its location on top of a hill and its distance from the sea guarantee a more continental climate in comparison to other parts of Sicily. The winters are cold, while during the summer there is a significant temperature variation between the night and the day – a crucial requirement for growing grapes rich in flavours and fragrances.

The company’s history began in 1830 when the property was acquired by the brothers Lucio and Carmelo Mastrogiovanni Tasca. The estate, a former royal stronghold (from the Arabic “Rahl Ali”, meaning “the house of Ali”) covered 1200 hectares, mainly used for the cultivation of grains. The cultivation of vines and fruit was only marginal and reserved exclusively for family consumption.
At the beginning of the 20th century, Lucio Tasca Bordonaro, the first count of Almerita, known as Don Lucio, heir of the estate, developed the cultivation of the vine and expanded the existing wine cellar. The land reform carried out after the Second World War led to the expropriation of a part of the original 1200 hectares, bringing the size down to the current 500 hectares. In 1957, Count Giuseppe Tasca d’Almerita, assisted by his wife, Baroness Franca Cammarata, took over the responsibility for the winery and introduced some significant innovations. But the true revolutionary was his son, Lucio Tasca d’Almerita, who was the first to try experimenting with certain international varieties, such as Cabernet Sauvignon, Chardonnay, Pinot Noir and Sauvignon Blanc. This intuition was the starting point for the recent history of the estate and its fantastic wines.

Tasca d’Almerita consists of 5 estates scattered throughout Sicily. In addition to the Regaleali Estate there are: the Tascante Estate, which includes two vineyards at the foot of the Etna volcano, in a unique area in development; the Capofaro Estate in Salina in the Aeolian Islands where the vineyards overlooking the sea produce the DOC Malvasia delle Lipari wine, also a place of hospitality in a beautiful and exclusive resort; the Sallier de la Tour of the Princes of Camporeale Estate in the vicinity of Monreale where, in addition to the classic Sicilian varieties, Syrah grapes have found their land of choice; and, finally, the Whitaker Estate on the island of Mozia in the province of Marsala, owned by the Whitaker Foundation, where a special Grillo vineyard variety is cultivated.
To conclude, those who are lucky enough to enter this timeless world, in addition to finding a company capable of producing excellent wines, will discover an authentic and lively land, representative of peasant values that express the strength and tenacity of the true Sicily.