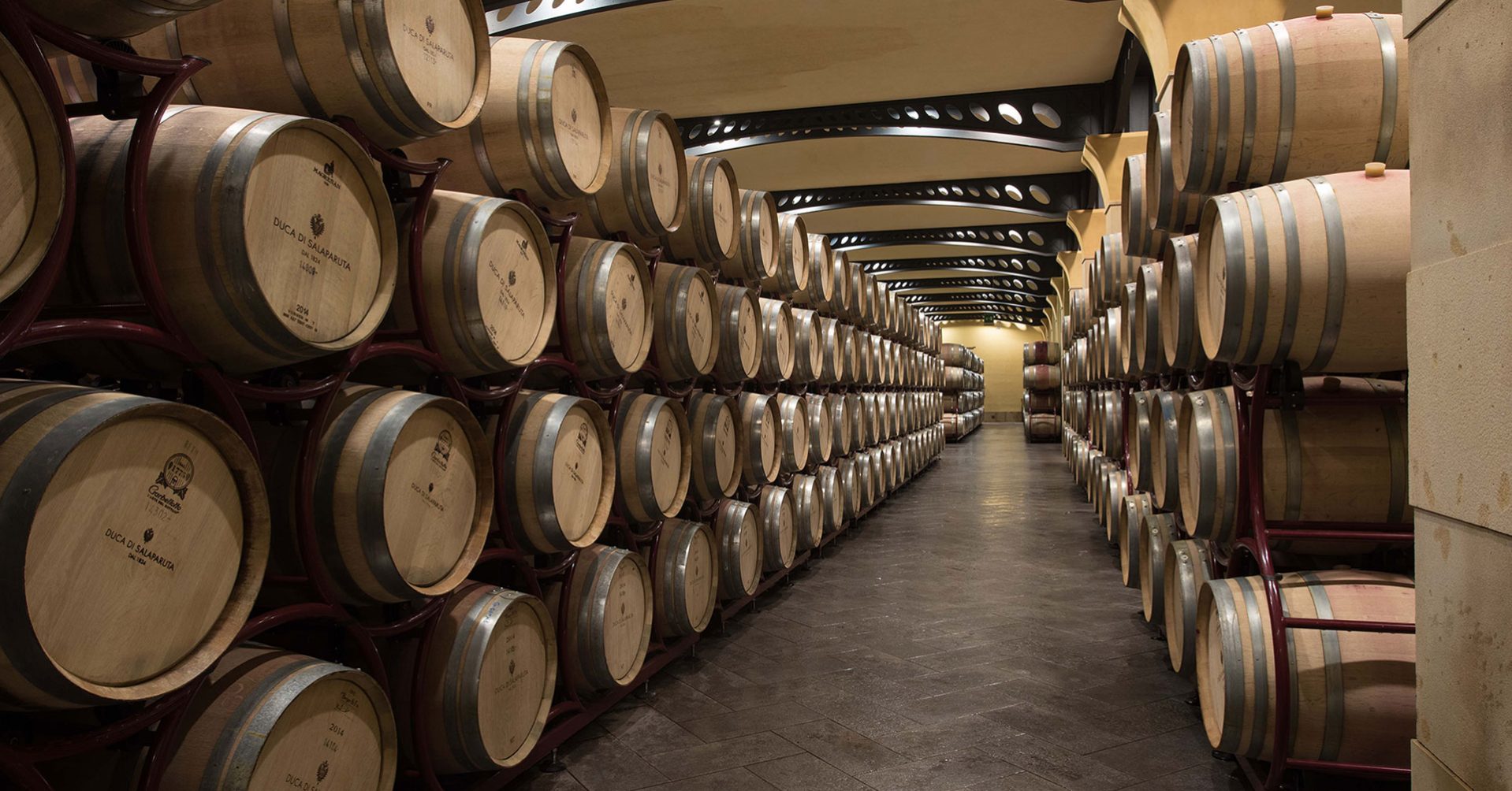 Just like the Florio Winery in Marsala, the Duca di Salaparuta Winery in Casteldaccia (in the province of Palermo) is the result of a desire to showcase the unique style of this Company and to offer guests an all-round experience that will turn out to be surprising and memorable. The contemporary and innovative style of Duca di Salaparuta and Corvo is reflected in the modern spaces of the Winery, where tradition and technology are perfectly combined, but also in the evocative use of light, colours and images to tell the passionate story of a company that has faced many challenges and is committed to respecting nature and the local area. Its history began almost 200 years ago: in 1824, Giuseppe Alliata, Prince of Villafranca, Prince of the Holy Roman Empire, Grandee of Spain and Duke of Salaparuta, who was a wine enthusiast, decided to produce his own wine from the grapes grown on his estates in Casteldaccia. He produced an elegant, French-style wine that was completely different from the style of Sicilian wines at the time. This is how Corvo Bianco and Corvo Rosso were born, the first wines to be bottled in Sicily, which are a symbol of the future-oriented approach that Duca di Salaparuta is known for. The Alliata family, with its strong personalities, curious by nature and with an anti-conformist attitude, ran the company until 1961, helping to establish a wine-making tradition in Sicily and introducing the economy and culture of this island to the world. After being run by the Sicily Regional Administration for a few years, it was acquired by the Reina family, which already owned the Florio brand and that, in 2001, also acquired the Duca di Salaparuta and Corvo brands. The two brands were merged to form a single company, the Duca di Salaparuta Group, currently the leading private wine-producing group in Sicily, which maintains its independent and forward-thinking attitude.

Not far from the sea, leaving behind the sunny coast of Palermo, visitors are immersed in the silent stillness of the cellars where the red wines of Duca di Salaparuta and Corvo are aged and refined in barrels and barriques neatly arranged in a labyrinth of rooms and hallways. The tour starts in the vineyards, where grapes are grown respecting the characteristics of the grape variety and the nature of each area, intervening as little as possible by accurately selecting the healthiest areas and applying cutting-edge technology to monitor the grape bunches and plants. The tour then continues in the vinification cellars of Aspra, where the grapes coming from the Duca di Salaparuta Estates and from long-term suppliers are checked and, if deemed of suitable quality, are made into wine. The tour ends in the Casteldaccia Winery with its vaulted ceilings. Here, the daily Corvo wines and the most original and innovative experiments of Duca di Salaparuta are aged for the amount of time required, thanks to the care of the Winery staff, which combine their personal experience with the use of advanced techniques, such as the Stop&Roll system, until the wines are ready to be tasted. In these austere halls, where modern architecture blends with the warmth of wood and light is gently reflected on ageing wine bottles, wines with an aristocratic charm are produced. One of these is Duca Enrico, the first Nero d’Avola, vinified pure in 1984, which comes from the heart of the Suor Marchesa Estate. Other wines have a nomadic character, such as Nawàri, the Pinot Noir made from grapes grown in the Vajasindi Estate, on the slopes of Mount Etna. But also the Corvo wines, which Italians have been drinking as a table wine for almost 200 years, with the charm of classics that are modernised in a natural way. The Corvo and Duca di Salaparuta wines are highly versatile, in fact they are suitable for every occasion and at various times of the day, for example for an aperitif, lunch, dinner or even for meditation. They are produced at this historic Winery by the sea and are shipped to more than 50 countries in the world.

After visiting the Winery, our guests are taken to the new tasting room that was built based on the winning model of the Sale Donna Franca and Duca Enrico, which welcome visitors of the Florio di Marsala Winery with its magnificent vaulted ceilings. This room is the result of a different and unique way of designing the spaces of the Winery, which is not only meant to welcome visitors in a pleasant environment but also to surprise and captivate them with the multifaceted wines Corvo, Duca di Salaparuta and Florio and with the use of unexpected images and music. The large white room is dominated by an imposing, 14-metre long oak wood table, with sharp lines and resting on a pearl grey resin flooring, which is used for tastings, during which a video with an original concept and production is shown. The rigorous atmosphere of the tasting room suddenly comes alive with images and sounds that stimulate guests who feel as if they are immersed in an imaginary world, taking them on a tasting and sensory journey to discover the modernity of Corvo, the elegance of Duca di Salaparuta and the irreverent intensity of the Florio wines, along with a selection of gastronomic specialities. Here, images are skilfully used to tell the story of a company with many different souls. It is ancient and modern, impertinent and reassuring, cutting-edge and deeply rooted in its century-old tradition… This unique balance allows for the production of wines that are never common, but rather a clear and genuine product of the area of origin and of the grape variety, which respects the naturalness of this fruit, as well as consumers, and embraces the eclectic nature of a constantly evolving Company.

The Enoteca Duca di Salaparuta, which was opened in 2017, is a wine shop that stands out for its modern and innovative style, the trademark feature of Duca di Salaparuta. The Enoteca is an open space, with clear lines and bright colours, delimited by crystal walls that allow the building to perfectly blend with the surrounding nature. It contains all the Duca di Salaparuta, Corvo and Florio wines, as well as a selection of outstanding hand-crafted products and traditional Sicilian specialities. “For this project, we tried to find an element that would enhance both the room and the product – the architect Franco Marabelli explains – and we decided it would be a round display stand, similar to a large oriental Gong, suspended and embellished with a gold foil finish. This element is repeated around the entire room and gives it a distinct character, whereas the bottles on display are placed on transparent Plexiglas shelving that also enhances them. The lacquered red background behind the Gong, from the floor to the ceiling, creates a stunning contrast with the gold finish of the display stand.
A series of black and white modular tables are used as display surfaces for all the other products of the Enoteca. An interesting detail is the front of the till counter, which is covered with mirrors that reflect the optical design of the flooring and part of the Enoteca. Behind the till counter there is a lava-like black wall resembling the shape of soil scorched by the sun and cracked by the heat.” Visitors arrive in the light-flooded Enoteca room at the end of a tour that leads them into a world full of charm, images and scents, which began in the barrel cellars of Casteldaccia and continued in the Tasting Room, thus completing a sensory but also conceptual journey characterised by unusual choices and a truly innovative spirit. The warmth of red, the sparkle of gold, the strength of black, together with the white furnishings and glass transparencies welcome visitors and create a peaceful atmosphere where design reflects the spirit of Duca di Salaparuta: contemporary, sophisticated and deeply rooted in the local area, which integrates with the building itself. This series of elegant and original elements highlights the Company’s wish to create a place suspended in time, exotic but also relaxing, where visitors can spend some time enjoying the Duca di Salaparuta experience.