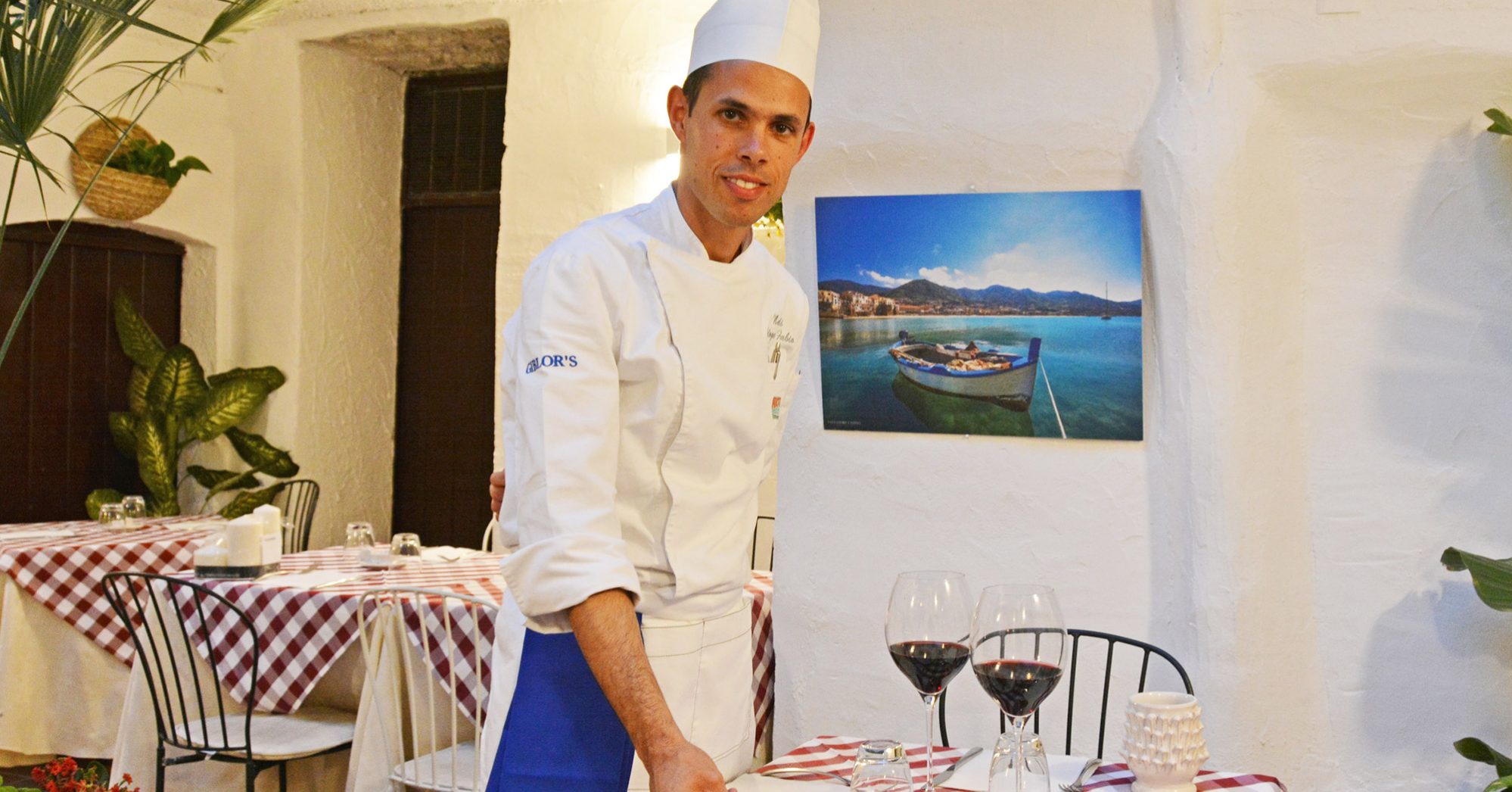 For Fabio Natoli, cooking means "innovation" but with a categorical imperative: we must use our Sicilian products.

Fabio Natoli inherited his passion for cooking from his grandmother, a “cultural” background based on simple but delicious flavours, that belong to his land, Sicily. Thanks to this passion, he tried himself in all the roles in a kitchen until the moment when he became, together with his father, the head chef of his own restaurant, Le Chat Noir, in Cefalù.

Going back in time, when exactly was your passion for cooking born?

«As it happens for almost all chefs, it came from my grandma. In summer I used to go on holiday to Buccheri, and there, almost all families traditionally made their own tomato sauce, as well as all the other seasonal preserves. My curiosity and passion for gastronomy were born there, when I was watching all the women creating those products.».

So, the passion comes from your family. And then, gradually, you started thinking about a real job in cooking…

«Yes, that’s how it all started. At first, I did some front of house jobs and then, in 2009, I moved to Basel, where I began my career in the kitchen. I started working with Alessio Coretta, one of the most talented pizza chefs in Switzerland. Despite the mistakes and difficulties of the trade, he managed to pass on to me all the passion for working with pizza.».

What brought you back to Sicily?

«In that restaurant, in Basel, in addition to pizza, we prepared some first courses, made of frozen pasta and low-quality sauce. After two years I decided to come back to Sicily because of this, and I thought I could lend a hand in the kitchen, working with my father. I began with the starters and I made a lot of mess, also because I had no idea about how to use a knife. I started from the bottom, I worked hard, there is still a long way to go but I have recovered the time I lost. I attended the Alma school in Parma, which is the capital of world gastronomy, one of the best schools in the world with international chefs. I was looking for a strong motivation to improve my professional preparation. Here I acquired professionalism and education. The almost “military” discipline also taught me what it means to team up. I’m the chef in the kitchen, I’m responsible for every member of the team, but it’s the team that makes a restaurant’s success possible: everyone has their own roles, but the team is the real strength.».

What should you always avoid in the kitchen and what should never be missing?

«Butter and cream. I use butter exclusively for crêpes, I could prepare them with oil, but I have respect for the French. Apart from this exception, those two products are banned in my kitchen. I always make sure to have plenty of the local raw materials: anchovies, fresh sardines, fresh fish. We have an agreement with Nassa Pescaturismo, which regularly delivers to us the catch of the day. This is a mandatory requirement in my kitchen – I never work with frozen food. If you come here to Sicily, you have to try the local products. Meat is not our forte, but in Cefalù, there is plenty of fish!».

At the school of Alma, you had the opportunity to work with colleagues from different backgrounds. According to this experience, what direction is the cooking taking in the recent years?

«We are turning back, but in the positive sense of the term: we use more raw materials, we try to process the products less. Today the tendency is towards the simple dishes, also because extremely elaborated food loses all its goodness.»

Now a curiosity: the knife is of extreme importance to the chef, and usually every chef has his own knife. What is your relationship with the knives?

«I forced my team to buy knives, they are essential and there must be a maniacal jealousy. You don’t lend your knife to anyone, you don’t let anyone wash your knife, and if the chef asks you to wash his knife, it should be understood as a sign of great esteem.»

You work in the kitchen with your father, how do you reconcile the father-son relationship around the stove?

«Upon my return from Alma, we had a conflict on the ideas of innovation, techniques and methods. Now, however, we have found a good balance: with his experience and my ideas, we have found a perfect union. He comes in the morning and says to me “I have this idea, could you prepare it?” And I do, or vice versa. Old-fashioned chefs have a hard time changing their mind, but I managed to convince my father.»

What is your favourite dish, the one you like to cook and suggest to those customers who leave the choice to you?

«There are several dishes. The swordfish roulade, our new revisited version, with Caciotta Ragusana cheese, aubergines… and other secret ingredients! Although I am not a lover of swordfish, I love this dish and am not the only one. As the first course, however, I would recommend Buccherese with pâté from the province of Buccheri, produced by one of my cousins, who won the world cup for extra virgin olive oil in 2015, 2016 and 2017. A forkful and it is as if I go back to being a child, with the true flavours from my those times.»

The history of the Black Cat, Le Chat Noir, began in the ’90s in via Carlo Bordonaro in Cefalù, thanks to the passion of the Natoli family, who over time…